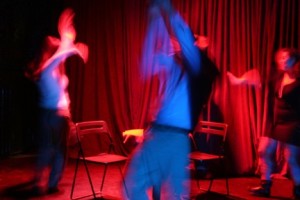 The mission of Tiny Dynamite is to offer Philadelphia audiences new ways to experience theatre, and to give Philadelphia artists new ways to create theatre. We are specifically interested in presenting the plays of UK and local writers.

Our principal project is A Play, A Pie and A Pint®. Under the banner of “brilliantly casual,” PPP presents one-act plays, beverages, and pizza in a cabaret setting reminiscent of the great pub theatre offered extensively throughout London. 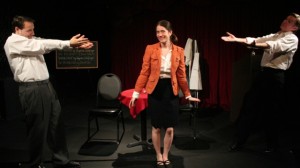 Tiny Dynamite was formed in September 2008 to present the works of contemporary British playwrights to local audiences in Philadelphia. The first show was a reading of two British plays at the second stage of the Adrienne Theater in February, 2009. The first full length production, “Dumb Show” by Joe Penhall, was produced at the 2009 Philadelphia Fringe Festival to critical acclaim. This was followed by the US Premiere of “Tiny Dynamite” by Abi Morgan, produced as part of the 2010 Philadelphia Fringe Festival.

In 2011 we became one of only 36 recipients from over 1700 applicants for the Knight Arts Challenge, Philadelphia. This was for our project, A Play, A Pie and A Pint®. In October 2011 we successfully matched the $25,000 grant from The Knight Foundation and both Season One in October 2011 and Season Two in March 2012 played to sell out houses and critical acclaim at The Society Hill Playhouse. We then produced an extended runs at Fergies Pub and at Milk Boy in Ardmore in May 2012.

In June 2012 we produced a full length work, “The Country”, at The Walnut Street Studio 5 to critical acclaim. In September 2012 we returned to the Philadelphia Fringe Festival, presenting a re-mount of one of our successful shows from A Play, A Pie and A Pint® as a co-production with Extreme Measures. We also performed at The Cosmopolitan Club in September 2012 and The Arden Theatre in February 2013 as part of their first friday experience. Season three of A Play, A Pie and A Pint® performed in March 2013 at Society Hill Playhouse and was our most successful yet with increased performances and box-office sales.

In 2015, Tiny Dynamite presented a wintry take on A Play, A Pie and A Pint: a remount of David Greig’s Being Norwegian served with mulled wine and mince pies.

In June 2016 we presented BREWERS FAYRE, also by David Greig, at The Arden Theatre’s Hamilton Arts Centre to outstanding reviews.

Season 6 included a special production in The Annenberg Court at The Barnes Foundation of Spacewang by Tom Wells, and a production of Chris Davis’ one man play, BORTLE 8, at The Drake Theatre in December 2016, once again served up with festive mince pies and mulled wine.

Philadelphia is the base of our operation. Tiny Dynamite was incorporated as a nonprofit corporation in Pennsylvania in April 2012 and in 2013 became a 501 (c)(3) non-profit organization. We operate with a July 1 to June 30 fiscal year. We have a board of three members and an advisory board who contribute knowledge, skill and interest.